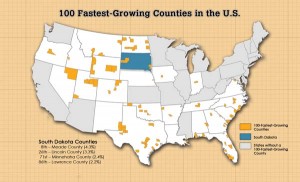 STURGIS (March 28, 2014) – It was no surprise for Ethan Dschaak to learn that Meade County is one of the fastest growing counties in the nation.

The district anticipates an enrollment of 610 students at the school for next fall.

The U.S. Census Bureau said Thursday that Meade County is the eighth fastest-growing county in the nation with populations greater than 10,000.

Topping the U.S. Census Bureau’s national list was Williams County, N.D., in the Bakken oil patch, with a 10.7 percent increase from 2013.

Meade’s county seat is Sturgis but much of the population growth has been around Piedmont, which is between Sturgis and Rapid City.

Meade County Commission Chairman Alan Aker said you can literally see the growth in the area.

“The school district built a new school that was supposed to fill up over the next 20 years, and it’s full in just its second year of being open,” Aker said of Piedmont Valley Elementary. “So something is happening.”

What’s happening is that people find the southern area of Meade County fulfills many of their needs, according to Meade County Commissioner Linda Rausch.

“It provides a great quality of life. You can live up in the trees and still have access to the interstate. It’s easy to get to jobs and schools in both directions,” she said.

New construction has also continued in the town of Summerset, which was incorporated in 2005.

“Residential building has really been a driver in this,” he said.

“A lot of people don’t realize that half of Box Elder is in Meade County and half is in Pennington. So there’s a lot of affordable housing out in that area of the county,” he said.

Meade County’s growth could be affected by some anomalies. The Census Bureau missed entire blocks of the county in 2010, Aker said, and the new numbers could be picking up those residents. And the conversion of Ellsworth Air Force Base housing in Box Elder to regular community housing could be adding new residents missed in prior censuses, he said.

Meade School District Superintendent Don Kirkegaard said he and other school administrators are also concerned about inaccuracies in census numbers. The districts have hired the Black Hills Knowledge Network to give them a clearer picture of projected growth in the communities their districts serve.

“They are going to dissect the census data and give us some numbers,” Kirkegaard said.

Rich confirmed that most of the development in Meade County is happening along what he calls the I-90 corridor from Piedmont to Summerset to Black Hawk.

“Most of it is within two to three miles of the corridor,” Rich said. “There is also some growth north of Box Elder.”

Phil Anderson, mayor of Piedmont, said his community hasn’t seen the growth that Summerset has been experiencing, but he can feel the balloon about to burst.

The owners of two properties near Interstate 90 and Exit 46 have died in the past year and the properties could soon be auctioned. One parcel is 80 acres to the south of Exit 46 and another is 40 acres.

“There is no question that things are going to start happening,” Anderson said. “It’s coming for sure, but we don’t know where or when.”

Anderson is a proponent of growth as long as it is “controlled” growth, he said.

“The county turned down zoning a few years back,” Anderson said. “You have to have planning and zoning in place or you have a hodgepodge. In southern Meade County, there are no rules and we’ve got a hodgepodge.”

South Dakota’s Lincoln County ranked 26th in the list with 3.3 percent growth to 49,858 residents, continuing a trend that began in the 1990s. The county that’s home to the south side of Sioux Falls grew by 86 percent from 2000 to 2010, on top of 56 percent growth in the previous decade.

Also in the nation’s top 100 for South Dakota are Minnehaha County, which grew by 2.4 percent to rank 71st, and Lawrence County, which came in at 86th with 2.2 percent growth.

Developed by the HomeSlice Group