Willie Whelchel was named the Black Hills Entrepreneur of the Year. A film produced for the banquet noted that Whelchel’s retail malls, convention center, and Sturgis Holiday Inn Express have transformed I-90’s Exit 30. Lonnie Isam won the Black Hills Volunteer of the Year award for his community service projects with the Future Sturgis initiative, and as a board member of the Sturgis Economic Development Corp. Isam owns Competition Distributing of Sturgis. 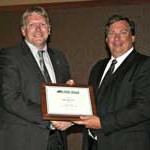 Norma Allen was also recognized at the banquet for her 2012 Excellence in Economic Development Award, presented in April by SD Governor Dennis Daugaard. She was selected because of her leadership in developing Sturgis’s firearms manufacturing cluster, and for helping South Dakota gain a prominent place in the firearms industry nationally.

Developed by the HomeSlice Group